America’s Beer Brands Are Being Bought by Foreign Investors

Drew Harwell of the Washington Post contacted me yesterday for his story “America’s most iconic beer brands are being bought by foreign investors. So what?” (Now Drink American has two Post interviews under it's belt).

“American beer is in the midst of a global identity crisis,” writes Mr. Harwell. I tend to agree with him.

In case you missed it, last week Pabst Brewing–makers of the iconic Pabst Blue Ribbon beer–announced that it will be bought by Oasis Beverages, which runs breweries in Moscow, Kazakhstan and Ukraine. Oasis Chairman Eugene Kashper, a U.S. citizen who lives in New York and will become Pabst’s chief executive, said he will keep the company headquarters in Los Angeles. Pabst moved from Milwaukee to L.A. in 2011 when it was purchased by investor C. Dean Metropoulos.

The Washington Post article by Mr. Harwell is a good read, particularly this part:

But the announcement of Pabst’s sale to Oasis, which brews a bevy of Russian beers as well as soft drinks and juice, was quickly painted as an American betrayal. Fans of PBR unloaded on its Facebook page, with one critic pledging to dump all of what he called “the new Communist beer” down the drain. Drinkamerican.us, a blog that ridiculed the foreign-owned Budweiser and celebrated Pabst’s American heritage, was replaced, briefly, on Monday with a large four-letter word. 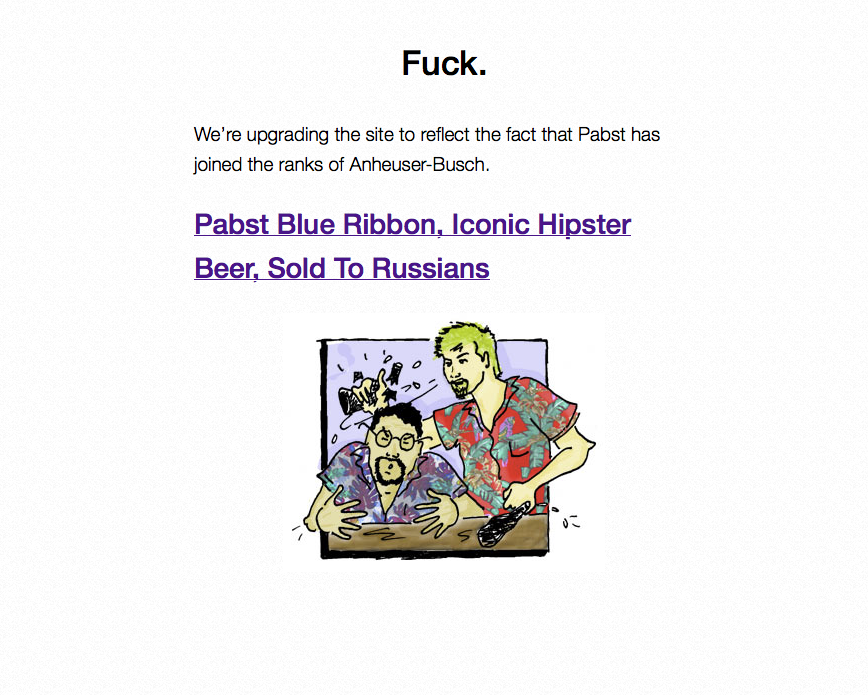 “I was actually surprised at how frustrated I was… that an American icon was even considering something like this,” said David Lauterbach, the New Yorker who started the Drinkamerican blog after Anheuser-Busch’s sale to foreign buyers in 2008. “That a red, white and blue beer can that so long had symbolized America would consider essentially selling out.”

And this part is also pretty good:

The United States is far from losing its status as a brewing heavyweight: About 85 percent of the lager Americans drank last year was made in the United States. […] Not many consumer favorites can boast such a high made-in-America share. So why do some drinkers show such a feeling of loss when an American brand extends overseas?

“I buy an iPhone even though it’s made in China, but it’s designed in California. I buy Fords even though the parts are made globally but still assembled in the U.S. But there’s just this historic, iconic value to a can of beer,” said Lauterbach, the Drinkamerican blogger. “All these old brands my father used to drink, they’re burnt into my head, back to this time when this was the American way. They hung in with us in for a couple generations, and then it gets to my generation, and I feel like — what happened?”

To it's credit, Pabst says that things will stay the same. Pabst has a twit-pic of a can of PBR posing like Gen. George S. Patton in front of a flag saying, “Pabst will remain American owned and operated.”

But friends and fans of this site may already know that Anheuser-Busch went through these same motions in 2008 when they first publicly rebuffed the idea that they would let themselves be taken over by Belgian-owned company InBev and even launched an American Family Values campaign. But in the end, money beat values and they sold to a foreign company. Consumer satisfaction for AB products dropped, and AB InBev doubled the board's salaries and laid off 1,000 workers.

Shortly after AB became AB-InBev, Pabst saw a nice little resurgence in sales. Although the Pabst Brewing press release that I quoted in this article is gone from their website they said that they “will be the last of the famous iconic U.S. brewers to be fully independent and American-owned.”

Perhaps they were right. Perhaps they are the last really famous iconic beers that our fathers used to drink. Or perhaps Yuengling or Sam Adams or any of the 2,768 smaller craft brewers in the U.S. will eventually prove them wrong.

Whether I know anything about beer is debatable, but I know what I like in a domestic beer… I like it to be domestic. The global economy is a part of any business that wants to succeed, but their identity is everything. Pabst (and other brewers, like Anheuser-Busch) have soured their identity.

[…] billionaire dealmaker C. Dean Metropoulos decided–after 5 less than years of ownership–to sell Pabst Brewing Company to Russia-based Oasis Beverages. It’s hard to deny Metropoulos the chops that he bought a brand and in just a few years can […]

New Budweiser Branding Asks You to Drink America (Great Again!)
Who Owns What Beers?
Two Six-Packs of Truly American Beers for the 4th of July
What are the InBev Brands?
What are the Anheuser-Busch Brands?