What Happened to Drink American Recently? 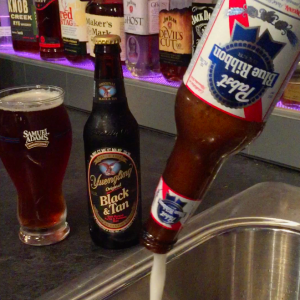 Drink American is in the middle of a bender.

After the news that Pabst Brewing was going to follow the paths of so many other great iconic American beers and sell their holding to a foreign company, I decided that it was time that Drink American got an overhaul in anticipation of being able to stay on top of this event.

In 2008, when the original site was set up by the members of Brian's Belly, the sale of “The King of Beers” was a possibility that we hoped to avoid with enough public outcry and support. When Anheuser-Busch decided to sell to InBev, a Belgian-owned company, the battle for a great American icon to stand it's ground on our soil was lost.

Although the Pabst deal is not yet done, it seems the same fate is inevitable. Pabst Brewing will be owned shortly by Oasis Beverages, which runs breweries in Moscow, Kazakhstan and Ukraine.

This is where your hard earned money should be going.

So a quick overhaul to the site, and we'll be slowing getting back online full speed. Please stand by while we reinvent Drink American.

Thank you for this site. I already knew of the sell outs of the iconic beer giants, but this site gives me an address to direct all of my naysayer friends to. I love Yuengling but unfortunately they do not sell it in Las Vegas where I live, so I drink lots of patriotic Sam Adams. Keep up the great work of keeping Americans informed of where their hard earned beer money is going.

New Budweiser Branding Asks You to Drink America (Great Again!)
Who Owns What Beers?
Two Six-Packs of Truly American Beers for the 4th of July
What are the InBev Brands?
What are the Anheuser-Busch Brands?